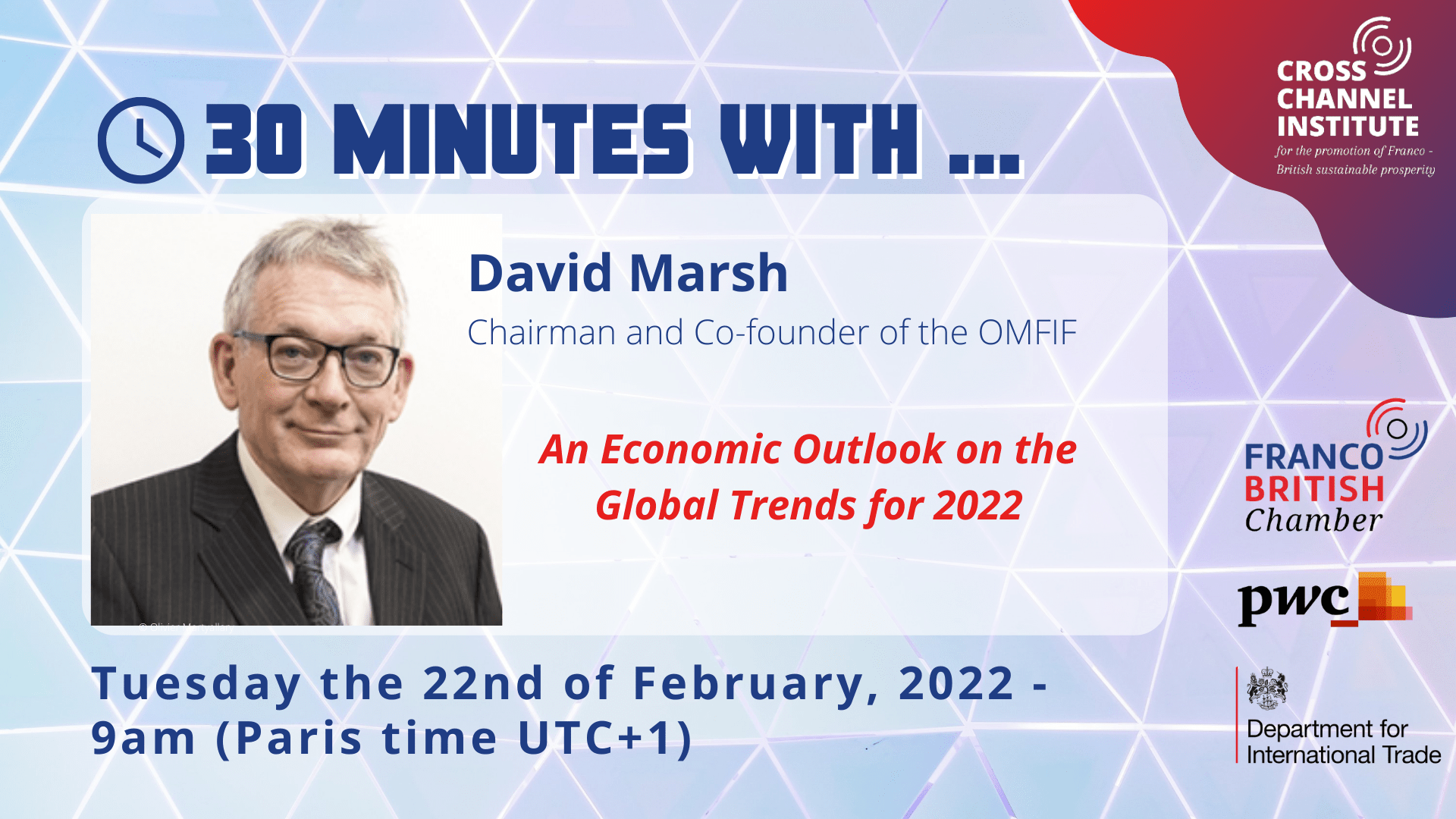 Because of Europe’s intricate financial and economic ties with Russia, the Ukrainian crisis will have a major impact for many years. Gigantic challenges lie ahead to sort out this issue, says British economist David Marsh.

A 1.5 – 2% interest rate would be the “nirvana of normality” for the ECB and other central banks. . But beware of ensuing social unrest that could hinder Europe’s economies

Disunity between EU members is the strongest risk for Europe in a volatile context.
Yet there are many opportunities for European countries to work together

The UK and France could take the lead on many issues
(in particular, by trying to convince Germany to reconsider its position on nuclear energy)

Paris, 23 February 2022 – The uncertainties of the Ukrainian crisis will have an overall impact on European economy and sanctions on Russia will affect many parts of German industry, said the British economist and financial expert David Marsh at an exclusive 30-minutes with… web conference organized by the Cross-Channel Institute in Paris.

Central banks will have to make difficult decisions if inflation keeps going up. They may be hoping for interest rates back at 1.5 – 2% in the mid-term over the next two-three years, which would be “the nirvana of normality” for them, “but there is a less than 30% probability of this happening” said David Marsh, because of the sensitivity of such measures. Any rate increases should be managed with great caution, he added. There should also be concerns about Italy’s ability to sustain such high rates, because of its current debt level. In the UK, social unrest, the return of Trade Unions are to be expected. “This will be a hot year for wages battles” he said. “We are likely to see social unrest, pressure on salaries, demand for higher wages, strikes.”

The strongest risk for Europe, especially in the current volatile context, is that of disunity. Never-the-less, Mr. Marsh sees many opportunities for European countries to work together, with the UK and France taking the lead on many issues. The French and UK economies have been faring better than Germany’s, with an inflation rate in France around 3%, thanks to the political decision to maintain energy prices artificially low, which is pretty good compared to 7% in the UK, he said.

Admittedly, there has been a fall in UK-France economic exchanges because of red tape. So much bureaucracy on either side of the Channel makes it much harder for businesses. But there have been lots of catch-up after a dip in 2020. Overall, the Ukrainian crisis will impact Europe in a major way for several years because of the latter’s intricate financial and economic ties with Russia. Gigantic challenges lie ahead to sort out this issue, Mr. Marsh said.

For him, the return of inflation is normal. What would be worrying is a double-digit inflation. Central banks and governments must be smart in the way they will be handling this. The new European fund set up by the EC will hopefully enable countries to borrow at low interest rates and EU to continue playing a good game, he noted.

The question of energy is also key. UK and France should work together on solving the issue of nuclear waste and try to convince Germany to return to nuclear power, Mr. Marsh advocates. For him, Germany abandoning nuclear power was probably a mistake and a hasty decision. In the wake of the Ukrainian crisis, Germany might want to reconsider. “It is somewhat ironical that the country that discovered nuclear fission and one of the strongest clean energies proponents is not only lagging behind in terms of nuclear energy use but is also in a poor position as regards its energy mix”,he said.

(Worldwide, Europe should do more in the field of exploration of new minerals and development of substitutes needed to implement new technologies, he added.)

David Marsh, CBE has an extensive knowledge of European economy. He is a consultant for large organizations, a journalist in international finance and economics, a visiting Professor at Sheffield University and King’s College Policy Institute. He is also the co-Founder and Chairman of OMFIF, an independent think tank for central banking, economic policy and public investment, providing a neutral platform for public and private sector engagement worldwide, which focuses on global policy and investment themes relating to central banks, sovereign funds, pension funds, regulators and treasuries.

Link to the interview

For more information on the services of the Franco-British Chamber: www.francobritishchamber.com