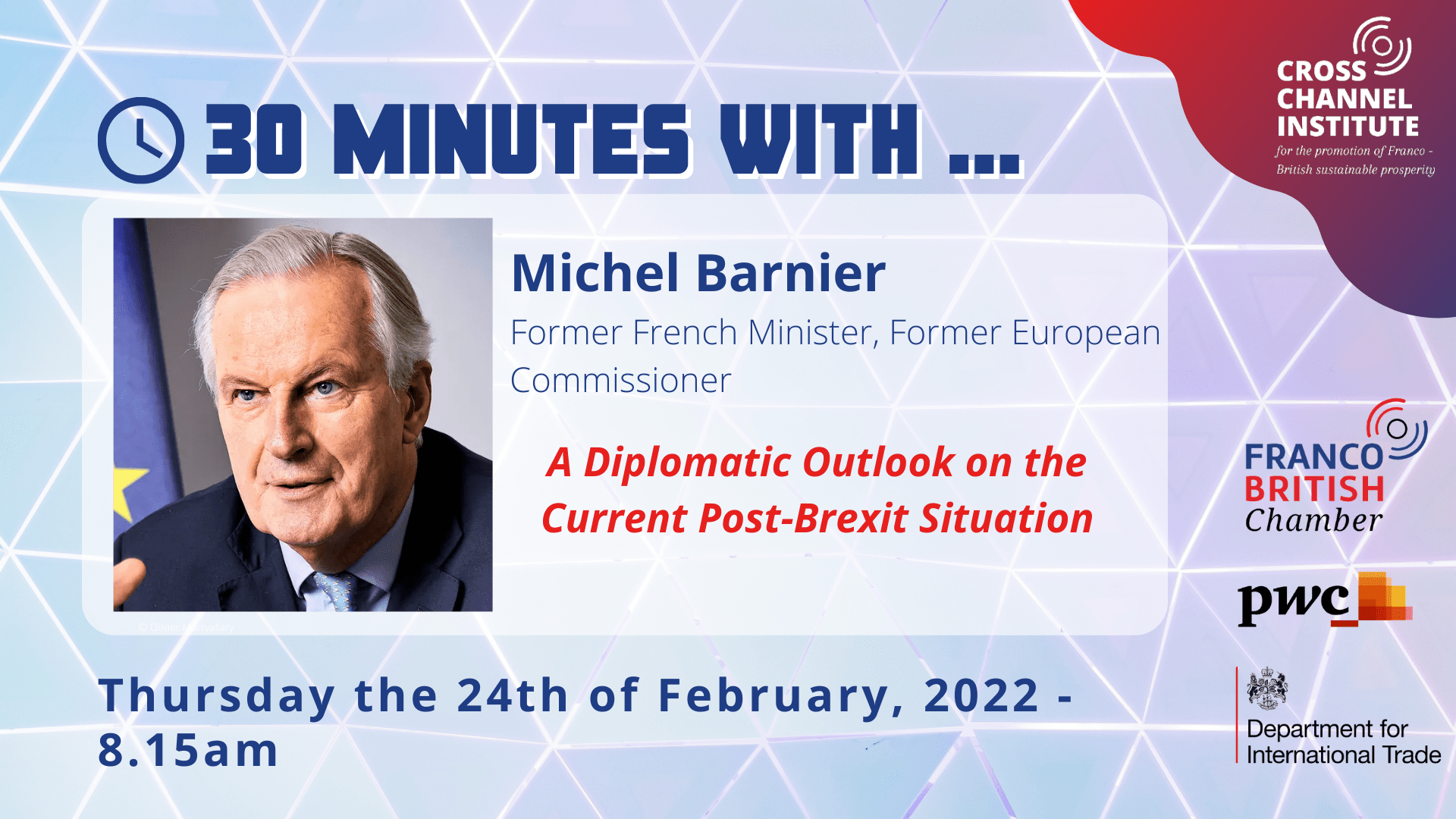 Conflict a “wake-up call” for Europe and its partners. Time to look beyond Brexit and work urgently together to brace ourselves for the future

Paris, 24 February 2022 According to Michel Barnier, the former Chief negotiator for the European Commission in the four-year discussion process over the UK’s departure from the EU, the brutal acceleration of the Ukrainian crisis will have chain consequences across all of Europe. Financial transactions, energies, agricultural production will be particularly concerned. He believes that the European Union and the United Kingdom will have to face these many consequences together. Michel Barnier was the guest of an exclusive webconference organized this morning by the Cross-Channel Institute to discuss the future of Franco-British exchanges.

“This conflict is a wake-up call for Europe. It is a stark warning to the EU to encourage its members and partners to start working together now on resulting political actions” across all areas, Michel Barnier underlined.

From an economic viewpoint, the departure of the United Kingdom from the European Single Market will have lasting consequences, in particular because of tariff barriers that impact trade flows. Michel Barnier foresees a structural 20% drop in trade between the United Kingdom and France, and more broadly the EU. But he believes that this can be sustained if all economic players fully understand the consequences of Brexit in each sector and seek to adjust to the situation.

Michel Barnier says that it is an absolute necessity to preserve the European Single Market, which represents more than 400 million consumers. It is “much more than a free trade area. It is a genuine ecosystem with the same rules for all who want to operate in it. ” It is also our main asset for the next 30-40 years”.

Thierry Drilhon, President of the Cross-Channel Institute and the Franco-British Chamber, for his part, underlined the ties that unite the two countries and the need to jointly shape their economic future over the coming decades.

The Cross Channel Institute is an independent Paris-based think-tank whose aim is to analyze and strengthen Franco-British economic exchanges so that both countries can work together to develop a mutually profitable and sustainable economic relationship. It includes both a strategic and an economic committee and stems from a partnership between its founders: the Franco-British Chamber, the multinational professional services network of firms PwC, the UK Embassy in France, its partners and members.

The Franco-British Chamber of Commerce and Industry, founded in 1873, is the oldest international Chamber of Commerce in Europe. The Chamber is offering its members- French and British companies of all sizes and from all sectors of activity- a vast range of services to help them to develop their cross-channel activity. Situated in Paris, for nearly 150 years, the Franco-British Chamber is a powerful business network which helps and links companies. The Business Connect service, from member to member, allows a privileged and efficient relationship.

For more information on the services of the Franco-British Chamber: www.francobritishchamber.com